Here is a rundown of the 9 books I read in December.  It concludes another great year of reading.  Be on the look out for my favorite books of the year post coming soon.  Happy reading!

It is finished.  It took the better part of a year, but I have finished Caro’s four-volume masterpiece biography on LBJ.  Caro is currently working on volume five.  He gives no sign of it nearing completion.  I’m not holding my breathe, but I’m eagerly anticipating its release.  I’ve purchased all my copies from used bookstores.  I will preorder volume 5 the moment its available.

For those that have read the volumes, here is how I rank them:

1. Means of Ascent
2. The Passage of Power
3. The Path to Power
4. Master of the Senate

I read 600 of the 700 pages of Passage of Power while locked in a cabin for two days.  That’s what I call a vacation!  I was riveted by the rivalry between LBJ and Robert Kennedy – both before and after the assassination of JFK.  I was also gripped by the LBJ as vice president.  For the first three volumes LBJ was the definition of power, control, and intimidation.  It was odd to see how the role of VP reduced him to a mere title.  The Caro volumes will easily make my list of favorites from 2019.

IN PURSUIT OF HIS GLORY: MY 25 YEARS AT WESTMINSTER CHAPEL BY RT KENDALL

I picked this book up for $2 at an antique store in McGregor, Texas a number of years ago.  Let that be a lesson that good books can be found anywhere.  Always take the time to look.  If you see a stack of books – dig through them.

I returned to this book after reading RT Kendall’s book on Jesus’ Sermon on the Mount in November. I also read three more Kendall volumes you’ll see on this log.  I heard Kendall preach at Truett Seminary during one of my Doctor of Ministry seminars.  The sermon was different from those often preached in the Paul Powell chapel.  It had less of the tone of an academic treatise and more of the tone of a charismatic evangelist.

Kendall was the pastor at Westminster Chapel for 25 years following in the footsteps of the legendary Martyn Lloyd-Jones who followed in the footsteps of legends G. Campbell Morgan and John Henry Jowett.  The book is a great pastoral memoir but also in part a textbook on how to pastor in the giant shadows of those who faithfully filled the pulpit before you.  It is also a tremendous portrait of the ups and downs of ministry.

Kendall is impossible to describe and impossible to put in anything that resembles a box.  He preached at legendary Westminster Chapel as a Calvinist but also as a charismatic.  He was mentored by the Lloyd-Jones but associated his ministry with Arthur Blessitt and Paul Cain.  Those things just don’t make sense! The volume is worth the cover price just to read the passages of Kendall sharing coffee and Kit Kats with Lloyd-Jones.

Another Kendall volume but I’m still processing this one.  Kendall is a tremendous reformed pastor and theologian and he is also a charismatic.  This volume highlights his charismatic side.  The lives of Saul, Samuel and David, are used to speak of the anointing of the Holy Spirit.  How does Kendall define anointing?  He would say, “It is a gift that functions easily when it’s working.”  You’d need to read the volume in order to unpack that!

According to Kendall, Saul grieved the Holy Spirit and was reduced to “yesterday’s man.”  Samuel was anointed as “today’s man” but God ultimately planned for major work to be done through David, “tomorrow’s man.”   Throughout the book Kendall provides a biblical approach to walk in step with the Spirit and warns of ways in which we can grieve the Spirit.

I mentioned that I’m still processing this book.  I fully admit the deficiency is me and not Kendall.  I also fully admit that my underdeveloped pneumatology is to blame.  I desire to be filled with Holy Spirit boldness and eagerly desire to walk step for step with the Spirit.  I simply have so much to learn.

Holy Fire: A Balanced, Biblical Look at the Holy Spirit’s Work in our Lives by RT Kendall 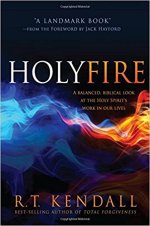 In a post above I mentioned hearing Kendall preach a sermon at Truett Seminary. It was a profound message on prayer.  And I don’t mean profound in a seminary chapel profound kind of way.  It was a fervent call to prayer built on the idea that God actually responds to prayer.  He admonished the crowd to pray.  I was moved.  To the book at hand …

Without ever directly saying it, this book is a response to John MacArthur’s Strange Fire.  From the promotional material of MacArthur’s book: The charismatic movement has always been a breeding-ground for scandal, greed, bad doctrine, and all kinds of spiritual chicanery. As a movement, it is clearly headed the wrong direction. And it is growing at an unprecedented rate.  Kendall is nowhere near the target of MacArthur’s criticism, but obviously Kendall felt the need for a response.

MacArthur is a self-admitted and well-documented cessationist. Kendall, a continuationist, does a tremendous job stating his position from Biblical texts, refuting those who might disagree, and giving his personal testimony.  He provides defense of his affirmation of miracles, healings, and yes, speaking in tongues.  Those who disagree with Kendall will not be persuaded.  His arguments will be dismissed as biased and anecdotal.  Those who agree with Kendall will benefit from such a solid treatment of Bible passages and critiques of opposing views.

My fourth and final Kendall volume this month.  This is perhaps Kendall’s bestselling and most popular book. It is a passionate call to forgive.  Kendall begins with the anecdote of seeking spiritual guidance from a friend.  After sharing his hurt and pain, Kendall was instructed by his trusted advisor, “You must totally forgive them.”  Unsatisfied with the answer, Kendall was once again instructed, “You must totally forgive them.  Release them, and you will be set free.”  This set Kendall on a journey of deep study of the biblical passages on the topic of forgiveness.  It also led to total forgiveness and freedom.

I love Kendall’s treatment of the Lord’s Prayer.  I was already a fan of his work on the Lord’s Prayer from his book on the Sermon on the Mount.  In this current volume I love his comments on the petition, “Forgive us our trespasses as we forgive those who trespass against us.”  Kendall remarks that that line “has made liars out of more people than any other line in human history.  But don’t blame Jesus for that.  We should mean what we say if we choose to pray the Lord’s Prayer.”

For those harboring unforgiveness, I can’t imagine a more helpful book.  You can have my copy.

A Layman Looks at the Lord’s Prayer by W. Phillip Keller 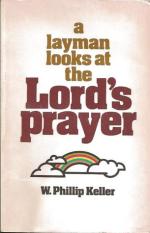 Last month I read a book on the Lord’s Prayer which received a big thumbs down from me.  In last month’s log I directed you to W. Phillip Keller’s work on the subject.  I followed my own advice and reread it!

I picked this volume up from a give away stack I stumbled across once upon a time.  It was in poor condition when I found it.  It is in even worse condition after reading it a few times.  In fact, this was my final reading of this copy.  It has been reduced to merely a collection of loose pages.

This is the type of book that I wished topped the best sellers list.  It is thoroughly biblical and down-right helpful.  It’s insight into the Lord’s Prayer are simple but powerful.  Here is a small sample from Keller’s reflection on “Our Father” to begin the Lord’s Prayer:

“There are times when we tend to take for granted the enormous privilege extended to us by being brought into the family of God.  This is no small honor. There devolves upon us the responsibility to bear this family name with dignity and high esteem.  This theme is developed in prayer. Emphasis is placed upon the paramount prestige of God, as our Father, and the desire for us to comply with His desires and wishes in our conduct.”

Designed to Lead: The Church and Leadership Development by Eric Geiger and Kevin Peck

I read a lot of leadership books but I’m typically no fan.  I want them to provide insight but they are typically filled with anecdotes and fluff.  This book is an exception.  So much so that I purchased a copy to give as a Christmas gift.

The strength of this book is a highly developed theology and ecclesiology.  It is not merely filled with pragmatism like many others.  The opening chapter contains a section titled “If We Believe” that provides the backbone of the book.  For example, the authors state, “If we believe that apart from him we can do nothing (John 15:5), we must recognize that much of what is recognized as ‘leadership’ will not stand the test of time.”  They go on, “If we believe that God created the world and handed responsibility for watching over the garden to Adam and Eve, then human leadership must be understood as God-initiated.” And they continue, “If we believe that God has chosen to make His multifaceted wisdom known through the church (Ephesians 3:10), then the leaders that are developed through the church are “at the center” of God’s design to represent himself in all facets of life.”  These statements, and subsequent explanations, continue for a number of pages.

The book is broken into three helpful sections: Conviction, Culture, and Constructs.  While all sections are strong, the section on conviction is perhaps the strongest.  It covers the topics of the conviction of leadership, leadership in the image of God, and leadership for the kingdom of God.

Experiencing God: Knowing and Doing the Will of God by Henry Blackaby and Claude King

Last month I read Masterlife, which led me to pick up this volume.  I’m extremely familiar with Experiencing God in Bible Study format.  When I was planting a church in North Waco, I used Experiencing God as Bible Study material in the homes of church members (as strategy to reach their neighbors).  While extremely familiar with the Bible study material, I had never read the book version.

The book is built around the seven realities of experiencing God:

If you’ve never done the study or read the book, join the millions of others who have done so and been blessed.  I was blessed just by retyping the seven realities above!

Start Something that Matters by Blake Mycoskie 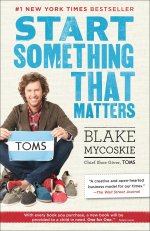 I picked up this volume from the Little Free Library outside of the Hopkins County Courthouse in Sulphur Springs, Texas.  Again, never pass on the opportunity to dig through books.

I really enjoyed aspects of this volume.  I picked it up because I wanted to read Mycoskie’s story.  He founded TOMS shoes with a simple business model: With every pair you purchase, TOMS will give a pair of new shoes to a child in need.”  Prior to TOMS, Mycoskie started a handful of other creative and helpful businesses.  He also placed second on the reality TV show The Amazing Race.  I’ve seen a bunch of his promo videos and interviews. He’s an interesting fellow.

I thoroughly enjoyed the aspects of the book which shared Mycoskie’s story.  When Mycoskie moved from memoir into a motivational book or business manual, I was less enthralled.  Yet, he does those parts well.  It is an extremely well-written and formatted book.