Here’s a rundown of the 8 books I read this month. It’s a strange and varied list but a good one.  There is a great deal of reading I’ve done this month that won’t show up on the log below.  I’m knee deep in my doctorate of ministry writing.  Here’s a pic of my D Min battle station: 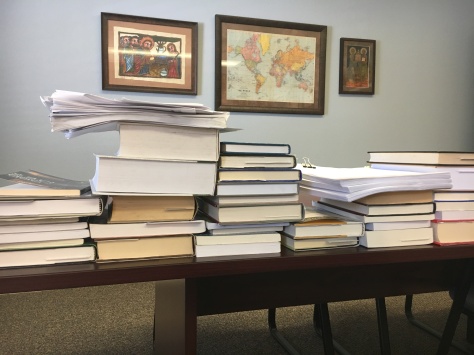 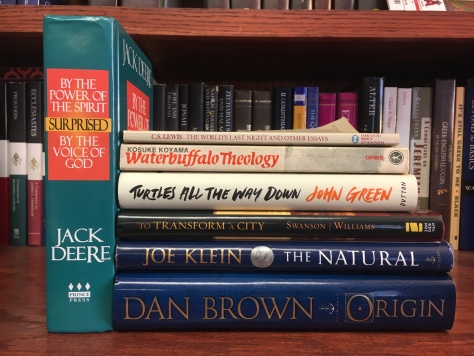 The World’s Last Night and Other Essays by CS Lewis 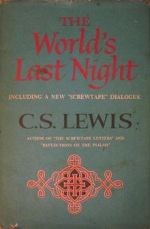 This book came to me as a gift from a former youth of our church.  She has recently moved to the Pacific Northwest to direct a camp.  On a trip to Powell’s bookstore in Seattle she kindly picked me up this volume plus a Powell’s poster.  The poster now hangs on the back of my office door and the book has now been read.

The World’s Last Night and Other Essays is a collection published in the US in 1960.  To be completely transparent, I’m more of a fan of Lewis’ fiction than his nonfiction but I found much to enjoy in this volume.  The title essay is a work about the second coming of  Christ.  The other essays have titles that preview their content:  “The Efficacy of prayer,” “On Obstinacy in Belief,” “Lilies that Fester, “Good Work and Good Works,” and “Religion in Rocketry.”  The collection also contains “Screwtape Proposes a Toast” a follow up to Lewis’ famous The Screwtape Letters.

Each essay is filled with Lewis’ wit, charm, and dazzling intellect.  The Screwtape dialogue  is worth the price of admission by itself. 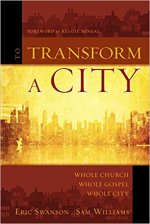 The book title is a great summation of the book ~ I wish that were true for all books!  In the year 2007 the number of people living in the cities of the world exceeded the number of people living in rural areas.  Swanson and Williams have provided a strategic vision on how church leaders can  engage cities for the sake of the Kingdom of God.  The earth’s population is now more urban than rural … how is the church to respond?

While I don’t doubt the statistics or dispute the need to engage cities, I found much of Swanson and Williams’ work to be transferable to any area of ministry.  I pastor in a rural context.  The city of Crawford sits 20 miles outside of a large Texas city (and 20 miles from an HEB).  Yet, I can easily apply the strategic principles outlined in To Transform a City to the rural context of Crawford.  I believe the authors have tapped into the idea that a church and church leaders can have tremendous impact and should seek to leverage the power of the message of the gospel to transform the community.  That’s the key!

Church leaders need to spend more time transforming the community with the message and love of Jesus Christ rather than merely holding services and keeping programs afloat. 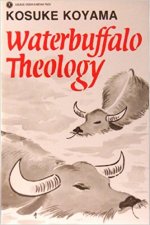 Kosuke Koyama, taught at the Union Theological Seminary and strove to make the teachings of Christ culturally meaningful to Asians, without sacrificing the essential gospel message. His 1974 book, Water Buffalo Theology, outlined his missiology and is jammed packed with theology.  While serving as a missionary in Thailand, Koyama was going about his work one day and noticed people working in the rice field among water buffaloes. “The water buffaloes tell me that I must preach to these farmers in the simplest sentence structure,” he wrote. “They remind me to discard all the abstract ideas and to use exclusively objects that are immediately tangible. ‘Sticky rice,’ ‘banana,’ ‘pepper,’ ‘dog,’ ‘cat,’ ‘bicycle,’ ‘rainy season,’ ‘leaking house,’ ‘fishing,’ ‘cockfighting,’ ‘lottery,’ ‘stomachache’ — these are meaningful words for them.”  While this might cause you to think that Koyama was short on substance … think again.

“The crucified mind, not the crusading mind, must be the mind of all missionaries, indeed of all Christians” 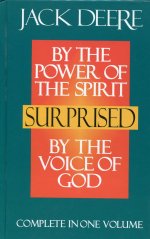 I love books and I also love how books are acquired.  This volume (two books in one volume) was a gift.  A few years ago I was visiting a colleague in ministry at his place of work.  As we walked down a hallway, my friend introduced me to the custodian.  This polite introduction led to a long conversation.  The custodian detailed his faith story and his long time struggle trying to guide his son in ways of righteousness.   I walked away encouraged and challenged.  A months later this gift arrived at my office.  It has sat collecting dust on my self until this month. Reading and teaching through the book of Acts has forced me to ponder the miraculous stories in the Acts narrative:  Do these things still happen today? Is this still God plan for believers and the church?  These questions reminded of this gracious gift from a custodian full of faith.

I’m still working through my thoughts on these subjects, which leaves me hesitate to say too much.  But here are a few thoughts.  Surprised by the Power of the Spirit left me nodding in agreement through most of the pages.  I’m not a believer in cessationism.  I fully believe God works miracles today.  I find no convincing biblical argument in favor of ceassationism.  Plus, I know too many friends who have stories of healings and visions.  I’ve got a few stories myself ~ while not on the scale of the book of Acts ~ but miraculous nonetheless.  Surprised by the Voice of God halted much of the head nodding on my part.  I’m too much of a Baptist to agree with arguments based on experience rather than the biblical narrative.

Jack Deere was a longtime Old Testament professor at Dallas Theological Seminary when he was introduced to a more charismatic view of faith.  Over time he began to embrace this charismatic view, which left him at odds with DTS and resulted in his removal.  He now enjoys the fruitful labor of pastoral ministry, writing and speaking. 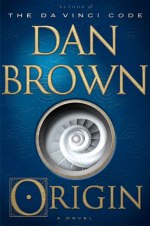 I’ve been a fan of Dan Brown since the Da Vinci Code craze of 2003.  Origin is the fifth installment in Brown’s Robert Langdon series and it represents the series well.  If you’ve read previous books, you will not find many surprises in Origin.  Langdon is going about  his symbology work, gets caught up in a crazy plot, and figures everything out with the aid of female counterpart and knowledge of art and religion.  Of course, claustrophobia, references to swimming laps, and a Mickey Mouse watch make an appearance.  Nothing new here.  But it can’t be denied … the books are page turners.

Origin tackles familiar religious themes:  Where did we come from and where are we going?  The series once again depicts religion in a battle with science.  While much is familiar, Brown does manage to sneak in some things that surprised me.  The book answers the two big questions with more nuance than I expected.  But lets be clear: Don’t go to a Dan Brown novel looking for spiritual answers.  This is a novel.  It should be treated as such.  It’s filled with generalizations and an authors imagination and agenda.  It should be read for fun.  And it definitely is fun.

Turtles All The Way Down by John Green

I’m was so excited to receive Turtles on my doorstep.  I’ve been a faithful member of nerdfighteria for number of years now.  If you don’t get the reference … look it up.  Or maybe don’t.  John Green and his brother Hank produce YouTube videos and a podcast that I consume each week.  They also have a number of educational endeavors and conferences.  Beyond that, they do tons of stuff that is flat out good for the world.  While I don’t see eye~to~eye with them on everything … I’m happy to support their work.  I preordered the book, which means I received a sign copy.  Green signed 200,000 of them!  It was fun to watch his YouTube video each week as the signing progressed. 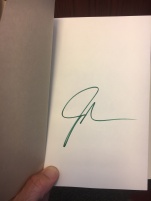 Turtles, like Green’s other works, is a Young Adult novel.  This genre is often depicted as books for young adults ~ but that is a mistake.  While some YA novels are geared toward young adult readers others are merely books in which young adults are the main characters.  Turtles is much more the latter than the former.  It is about teenagers experiencing adult life.  It has some course language and subject matter.  Mostly the book depicts the main characters struggle with mental illness, a subject matter very personal to Green.

The beauty of a John Green book is his ability to describe teenage life ~ habits, language, emotions ~ without his characters being flat, stereotypical  cliches.  Rather, his characters quote works of poetry along with slang.  His characters express sincere and complex emotions while also voicing expected teenage angst.  Turtles is an insightful look into mental illness and much more.  It borders on brilliant.

The Natural: The Misunderstood Presidency of Bill Clinton by Joe Klein 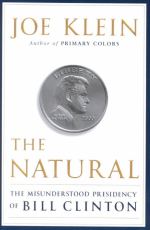 This book has been sitting in my presidential to be read pile for a few years.  I’ve always been attracted by the cover and the author.  The cover is a great piece of marketing.  The author has anonymously written about Clinton before.  Joe Klein published a piece of “fiction” titled Primary Colors that followed a character running for president which showed great similarities to Clinton’s 1992 presidential campaign.  After years of speculation, Klein admitted he was the anonymous author.  Primary Colors is gripping read.  The Natural not so much.

The subtitle, The Misunderstood Presidency of Bill Clinton, is inaccurate in my opinion.  For those with any familiarity with the Clinton presidency, the book describes what you already know.  There is nothing to be misunderstood.  Bill Clinton was a highly gifted politician with a number of fatal flaws to include loose morals, bad hiring decisions, and tremendous ego.  The book describes these flaws from a number of angles.