Here’s rundown of the 7 books I read in May.  The month was slowed a bit by preparation for my final doctoral seminar and two weeks spent in New York City for the seminar.  Nonetheless, the list is filled with some interesting books and a few interesting stories of how the books fell into my hands.  Happy Reading!

Yes, this is E.B. White from Charlotte’s Web fame.  This book was referenced numerous times in my 12 days in NYC.  It convinced me to hit “buy here with one click.”  It was eagerly waiting for me on my doorstep when I returned from the big city.

This slim volume is White’s reflective essay on the ever~changing New York City.  Published in 1949, the references are dated but the sentiment portrayed in the prose still resonates.  In a mere 7,500 words, White provides a running commentary on restaurants, neighborhoods, people, lifestyles, and small things like a tree in a garden.  The prose is a bit majestic.  Here’s a taste:

“New York will bestow the gift of loneliness and the gifts of privacy.  It is this largess that accounts for the presence within the city’s walls of a considerable section of the population; for the residents of Manhattan are to a large extent strangers who have pulled up stakes somewhere and come to town, seeking sanctuary or fulfillment or some greater or lesser gail. The capacity to make such dubious gifts is a mysterious quality of New York.  It can destroy an individual, or it can fulfill him, depending a good deal on luck.  No one should come to New York to live unless he is willing to be lucky.”

Crawford, Texas is a far cry from NYC.  Yet, I love such an insightful look at one’s own context.  Perhaps one day a slim volume will contain my rambling thoughts on the Western White House.

The Mystery of Calvary by Gerard Rooney

A number of months ago I enjoyed a 24 hour getaway with my wife in Salado, Texas.  The 24 hours included a hibachi grill, a matinee movie, a quant B&B, and a stop at a local book store.  In the slow tour through the beautiful bookshop I stumbled upon this work.  I was unfamiliar with the title and the author.  I did a quick google search and found the book for sale at numerous second hand shops but couldn’t find any significant info on the book or Gerard Rooney.  I sat down and began to read:

“The Mystery of Calvary is centered in the conflict of good and evil.  The cross of Christ was a battleground, where man’s evil sought to destroy God’s Goodness and man’s lie fought to conquer the Truth of God.  There was an awesome contradiction.  As great shafts of light emerged from the cosmic clash, men began to see that history had reached its turning point.  A whole new series of standards was being erected to guide the destinies of men.  Victors were seen to be the vanquished, while the vanquished were now seen to be the victors.  What the world considered success turned out to be failure, while failure in the eyes of the world was now seen to be success.”

I was sold.  I handed the booksellers a few dollars and gladly walked out with the treasure.  The book is a fairly dense study of the cross in a mere 150 pages.  The author’s Catholic theology is clearly visible from time to time but the book is solid work of theology.

The Deathless Preacher by Marshall Wingfield

This is a collection of sermons by Marshall Winfield titled after his sermon on the book of Jonah.  These are beautifully written and theologically rich sermons.  They are a delight to read even though I disagree with much of the content.  For example, Wingfield refuses to see Jesus as the suffering servant in Isaiah, does some rather interesting work on atonement theories (seems to outright reject penal substitution), and reads many Old Testament passages as mere parable. 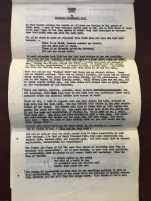 Winfield was the long tenured pastor of First Congregational Church in Memphis, Tennessee and left a legacy as a preacher, poet, and humanitarian.  I was unfamiliar with the name when I found this collection of sermons.  I probably would have passed the book up, but I found a treasure waiting for me inside.  Nestled inside the book was a copy of Winfield’s 1950 Easter sermon.  It includes his handwritten edits and additions.  It’s a wonderful addition to my book collection due to this unique memento.  It fascinates me how this book, and the accompanying sermon notes, found it’s way from the original owner to my hot little hands.  in This kind of stuff that keeps me in love with books and used bookshops.

This was my nightly reading while in NYC.  Its a doorstop of a book and I love my aging, weathered copy.  Within its pages Lewis provides a scathing look religion and specifically preachers and the gullible sheep that follow them.  It is a satirical work (written in 1926) that gives an outsider’s glimpse into the religious activity of America in fundamentalist and evangelical circles.    The Reverend Elmer Gantry is drunken womanizer who is led into ministry due to natural gifts and the chance at easy money.  After numerous (and I mean numerous) twist and turns, Gantry finds himself a successful Methodist minister despite his continued sexual indiscretions and blatant hypocrisy.  Lewis did research for the book by spending time in Kansas City with a handful of preachers.    The character of Sharon Falconer was loosely based on events in the career of radio evangelist Aimee Semple McPherson who founded the Pentecostal Christian denomination know as the International Church of the Foursquare Gospel.

While I should be offended and mortified by Lewis’ view of the church and preachers, I found the book to be enthralling and might list it as one of my favorites.  It is a well targeted critique at those that pursue ministry simply as a career rather than a calling.  May I never be counted among them.  It is also a great perspective on how those outside the church view the hypocrisy they see from inside the church.  May I resemble Christ more than I resemble a hypocrite and may I, along with the church, fix my eyes on Jesus.

Count Zinzendorf and the Spirit of the Moravians by Paul Wemmer

This is a self-published work and it reads as such.  It has a few problems with formatting (random font size changes) and a few problems with narration (author inserts personal thoughts and details into the history).  Yet, I love genuineness and passion that comes from the author’s voice.

Wemmer opens the book with his own story and reasoning for writing the book.  It is a sweet chapter that details his move from a devout Catholic to one who prayed the sinner’s prayer and was baptized in the Holy Spirit.  This intimate chapter alone is worth the few dollars for the book.

I love the story of the Moravians.  It is a story of a group devoted to Jesus and subsequently devoted to worship, community, and spreading the message of Jesus Christ.  Their influence over the course of history has been tremendous.  Their influence includes the conversion of a young John Wesley.

Lyndon Johnson and the American Dream by Doris Kearns Goodwin

Not all presidential biographies are created equal.  This one ranks among the best (in my humble but correct opinion).  Kearns Goodwin is a well known voice due mainly to her tremendous book on Lincoln, Team of Rivals.  This Johnson biography a much earlier work informed by her personal relationship with LBJ.  Kearns Goodwin served on LBJ’s White House staff and served as a bit of personal confidante with the president.  She had an inside glimpse of the Great Society and the wild years of the 1960’s and the Vietnam Conflict.  I particularly enjoyed a glimpse of Johnson as a college student learning the ropes of social influence and politics.  I also found the details of Johnson learning and mastering the art of power as a young senator to be fascinating.  This book was a warm up to a much larger biography of Johnson by Randall Woods that sits among my TBR pile.

In an age of 800 page presidential biographies (Kearns Goodwin is the author of a few of them) it is enjoyable to read a thoroughly informed and detailed bio that is merely half the size.  This work stands out because it reads like an intimate portrait not a researched treatise.  The book is a serious biography but its written in an insightful tone that only comes from a personal relationship with the subject.

Father Joe: The Man Who Saved My Soul by Tony Hendra

I was listening to a podcast prior to my trip to NYC that featured Tony Hendra.  The podcast had nothing to due with books but focused on Hendra’s career in satire, TV, and journalism.  As a minor note, Hendra briefly discussed his spiritual journey and his relationship with a priest.  He mentioned that he detailed the relationship in a book he wrote a few years back.  I quickly looked the book up on Amazon and added it to my list.

… a few weeks later I found myself in a bookshop in Time Square.  Scanning a clearance shelf I discovered Father Joe for $1.  Sometimes books just fall into your hands.

This is a strange but fantastic spiritual memoir.  The book opens with a wild story in which 14 year old Hendra is involved in an inappropriate relationship with an elderly women.  Upon discovery of the relationship, Hendra is taken to see Father Joe.  This initial meeting is the beginning of a life long mentor relationship.  The impact of the relationship is so strong that Hendra feels called to the priesthood.  Under the guidance of family, he puts the priesthood on hold to attend college and quickly finds himself publishing works of satire and working in comedy.  He never pursues the priesthood again but maintains regular visits to the monastery to visit Father Joe.