In the middle of the Sermon on the Mount Jesus gave his disciples a tutorial lesson on prayer.  Absent from the prayer is “I” and “me” and “my.”  Instead  you find “us” and “we” and “our.”  Jesus gives a corporate, communal prayer.

“This, then, is how you should pray:

“‘Our Father in heaven,
hallowed be your name,
your kingdom come,
your will be done,
on earth as it is in heaven.
Give us today our daily bread.
And forgive us our debts,
as we also have forgiven our debtors.
And lead us not into temptation,
but deliver us from the evil one.

Every time I meditate upon what we come to know as “The Lord’s Prayer,” I linger on the line “on earth as it is in heaven.”

I’m fascinated by the idea of heaven coming to earth.  I’m beyond fascinated with it – I long for heaven on earth.

Here are a few stories from around the world.  Join me in prayer? 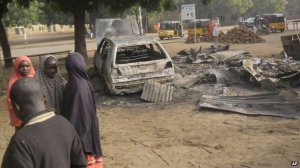 The attackers sped into a Nigerian town with grenade launchers — their gunfire and explosions shattering the early morning calm.

As terrified residents scattered into bushes in Baga town and surrounding villages, the gunmen unloaded motorcycles from their trucks and followed in hot pursuit.

Residents hid under scant brush. Bullets pierced them.  Some sought refuge in their homes. They were burned alive.  Many who tried to cross into neighboring Chad drowned while trying to swim through Lake Chad.

By the time the weapons went quiet, local officials reported death tolls ranging from hundreds to as many as 2,000 people.

That was January 3, nine days ago.

On Monday, bodies still littered the bushes in the area.

“It is still not safe to go and pick them up for burial,” said Musa Bukar, the chairman of the local government where Baga is located.

At least 25 people have been killed in the last month in a string of ambushes, clashes and other shootings involving vigilantes, drug traffickers, civilians and the army and federal police. It has not always been clear who shot whom.

The dead included the son of one of the top founders of the so-called self-defense paramilitary organizations that rebelled against traffickers and local authorities in Michoacan two years ago.

None of these groups have the right to kill. It is outside the law.
– Alberto Suarez, archbishop of Morelia, referring to vigilante groups
In an attempt to restore order after the rise of the vigilante groups, President Enrique Peña Nieto early last year poured federal forces into Michoacan and appointed longtime aide Alfredo Castillo as federal commissioner for the area. Castillo attempted to convert the vigilantes into a more formal rural police force, but many refused to join or disarm.

The raging killings, kidnappings and extortion that had long dominated Michoacan, where drug gangs for years controlled police departments and city halls in many parts of the state, seemed to decline. Several top leaders of the principal cartel, the Knights Templar, were captured.

Pope Francis left Monday for his second trip to Asia, where he will deliver a message of peace and reconciliation in Sri Lanka, a country shaken by a decades-long civil war, and then visit the Philippines, the Vatican said on the eve of his visit.

The Holy See’s attention to Asia dates back centuries, but Francis has made the region a new priority, with two visits in less than six months, moderating a more Eurocentric vision of the church that has prevailed in recent years.

In addition to looking to heal divisions in Sri Lanka, Francis will offer consolation to the people of the Philippines, who suffered a devastating typhoon in 2013, the pope and Vatican officials said.

On Monday, Francis called his trip to Asia a sign of his “interest and pastoral concern for the people of that vast continent.”

“I wish to voice yet again the desire of the Holy See to offer its own contribution of service to the common good, to harmony and social concord,” Francis said in his annual address to the diplomats assigned to the Vatican.