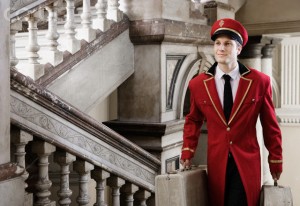 There is a story that the old timers around Princeton, New Jersey love to tell. It’s about a day in the early 1940’s when a well-to-do woman drove to the Princeton Inn in her touring car. She stepped out of the car, reached into her purse, and pulled out a quarter. She pressed the quarter into the hand of the scrawny, wild-haired man next to the curb and said, “Take my luggage to my room immediately” as she strolled into the lobby. The man next to the curb, who happened to be Albert Einstein, looked quizzically at the quarter. After a few moments, he shrugged his shoulders and took the bags into the lobby.  (…. I first heard that story from Thomas Long)

It was a case of mistaken identity, misjudged appearance. She took one look at the wild-haired man and assumed he was the bellhop rather than the world’s greatest scientist.

In the context of the church, I find we often fall victim to mistaken identity or misjudged appearance. Yet, with much greater consequences. I have frequent conversations with people who speak of God but with a case of mistaken identity or misjudged appearance. They are speaking of God but they have identified him improperly or have judged him inaccurately. And I’m talking about church people!

Here are three reasons why I believe we have a tendency to lean towards mistaking the identity of God:

Relying on hearsay. Many have an improper view of God because the statements of others have formed their image of God. Their understanding of God has been built by hearsay, second-hand information, or gossip. They repeat things they’ve heard rather than things they know.

Watching from the sidelines. Many people have an improper view of God because they never got their hands dirty in the things of God but have merely watched from the sidelines. They know they should love their neighbor – but they have never develop a relationship with their neighbor and found ways to love them. They know about the need to be on mission – but have never been on mission.