Here’s a rundown of the 8 books I read in January.  A great collection of books.  Happy reading. 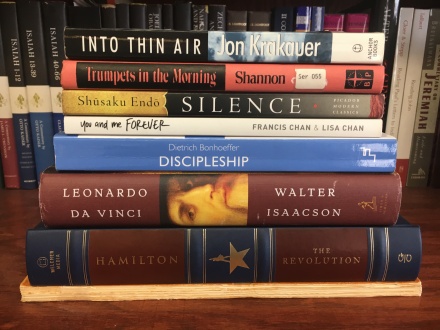 This book is likely in the top 3 of my most reread books.  I’m sure I reread it every year or two.  I consult it throughout the year when looking at aspects of the Sermon on the Mount or Bonhoeffer’s discussion on baptism.  I have numerous copies but my favorite copy probably only has one more read in it.  It is busting at the spine in numerous places.

This book has a popular edition titled “The Cost of Discipleship” published by Touchstone but I much prefer this volume published by Fortress press as the 4th volume in the Dietrich Bonhoeffer Works collection.  I find the translation to be superior (not that I know German but prefer how the English reads) and it has tremendously helpful textual and contextual annotated footnotes.

Discipleship is mostly a deep study of the Sermon on the Mount plus a lengthy exploration of Matthew 10.  It is easily most known for its discussion of cheap grace vs. costly grace.  It still strikes a deep chord in me: “Cheap grace is preaching forgiveness without repentance; it is baptism without the discipline of community; it is the Lord’s Supper without confession of sin … cheap grace is grace without discipleship, grace without the cross, grace without the living, incarnate Jesus Christ.”  On the other hand costly grace is costly “because it calls to discipleship; it is grace, because it calls us to follow Jesus Christ.  It is costly, because it costs people their lives; it is grace, because it thereby makes them live.”

Trumpets in the Morning by Harper Shannon

While the book is dated, I love it for one reason: Shannon speaks of the thrill of the ministry.  The thrill of the ministry is a trumpet in the morning that calls him to work.  He writes, “the greatest challenge in life, of course, is that of being a Christian.  In my opinion the greatest thrill is being a minister of the gospel.  There is no greater excitement or commitment.  With all of its problems and heartaches, with its responsibilities and tremendous demands, the ministry is still the greatest calling.  As has been indicated, it may be the worst profession, but it is the greatest calling!  I would not trade places with the President or the governor or a king.”

As a mentor of mine often says, “The world needs more happy pastors.”  I couldn’t agree more.

Silence: A Novel by Shusaku Endo

Three words for this book: Wow. Wow. Wow.  Thought that was bad? Check out this terrible play on words: Silence left me speechless.

Silence is a work of historical fiction but it hits upon tons of truth.  Once welcome in Japan, missionaries were officially expelled from the country by the 1620s. A number of priests, however, went underground to minister to the Christian community. Among them was Fr. Cristóvão Ferreira, a Portuguese Jesuit.  I pulled this quote from the the Jesuit’s websites: “Ferreira’s story is one of the most dramatic stories of Christianity and missionary history of all time.  He was the great missionary, the superior of all Jesuit missionaries, and the first to renounce his faith under torture,” says Fr. M. Antoni J. Ucerler, SJ, a professor at the University of San Francisco and an expert in Japanese Christian history.   Silence follows two Jesuits who land in Japan to find out if the rumors of Ferreira’s apostasy are true.  Above all, they search for Ferreira.

The book is a brutal but beautiful depiction of sincere faith and missionary zeal.  As a protestant, I think it highlights the importance of an empowered laity.  As a Christian, the story forces a gut check on commitment levels.  It also bring ups endless questions on missionary strategies.

The book was recently adapted into a film directed by Martin Scorsese.  I think the movie is wonderful but it is not for the faint of heart.

I have to admit … I went into this book expecting greatness.  Isaacson’s previous biographies on Einstein and Steve Jobs are true gems.  Both could easily be in contention for my top ten biographies list.  I wanted this to be good and it did not disappoint.

Yet, this is not your typically biography.  The book is built around Da Vinci’s famous and non-famous works.  Most of the chapters focus on a particular work, provide descriptions and receptions of the work, details how Da Vinci received the commission, and fills in interesting backstories.  Above all, the book describes the works of Da Vinci while also giving glimpses of his endless personal journals that includes sketches, drafts, notes, dairy entries, inventory lists, and much, much more.

I’ve read a few reviews of this book that criticize it heavily.  Many argue that Isaacson provides less of a biography and acts more like an amateur art critic.  Since I have never read the work of an art critic, Isaacson comes across as a professional to me!

Another word needs to be said about the sheer beauty of this book.  It is printed on thick, glossy pages and contains beautiful pictures of Da Vinci’s art.  It is a pleasure simply to hold it and thumb through it.

Into Thin Air by Jon Krakauer

This book contains a number of critical elements for a great book for me: great writing, expertise in an arena unfamiliar to me, substantive characters and lessons learned.  I read this book in two days and I have started at least 5 conversations about it since I completed it.  I even delayed a meeting in my office by at least 30 minutes by describing the book to a collected group of pastors.

Into Thin Air  describes the two days in 1996 when eight people died attempting to descend from the summit of Mt. Everest.  The story is told by Krakauer, and outdoor writer, who happened to be an eyewitness to the disaster as a member of one of the expeditions.  It’s a tragic story and Krakauer is only one of many people who have released their version of it.  Numerous books and documentaries have been released either attempting to support Krakauer’s story or refute it.  Another characteristic of a good book: It has sent me down a trail of reading various accounts of what happened that day at 29,000 feet.

I’ve also read Krakauer’s Into the Wild.  I’m now tempted to read the entirety of his work.

Hamilton: The Revolution by Lin Manuel Miranda and Jeremy McCarter

I’ve been in love with Hamilton the Musical for over two years.  I listened to the soundtrack nearly everyday when out for a run.  Yet, I’ve always stayed away from this book assuming it was a merely a cash cow.  Yet my in-laws gave it to me as gift, purchased from Hamilton Grange National Memorial in NYC.  I picked it up and could not put it down.  It was my bedside reading for two weeks.

Despite my original objections, countless hours were put into the production of this book.  Along with beautiful photography of the Broadway play, the books contains intimate backstories on the development of songs and profiles of the actors.  My favorite portions of the book are Lin Manuel Miranda’s annotations on the song lyrics.  He provides commentary on word choices and previous versions of song.  He mentions the parties and train rides that birthed certain songs.  The book even includes a number of pictures from Lin Manuel Miranda’s journal with original drafts of songs.

I’ve listened to Hamilton for over two years and I’m amazed by its brilliance every time.

For the last year I have stumbled into the hobby of walking various spots in Crawford, Texas  looking for fossils and artifacts.  It is a fantastic source of exercise and has also allowed me to get my kiddos involved.  Sometimes they love it and sometime they hate it.  Anyone that walks into my office will be shown a number of cool things that I’ve found.  The hobby has also led me to read numerous books on Native Americans.

I don’t know the origins of this book.  I’ve done some searching but can’t find anything of substance.  The cover mentions it is the third edition and fourth printing! Yet, it is obviously not massed produced.  The pages are held together by a staple binding.  It came into my possession via church member who saw it in a garage sale and thought of me.  You gotta love friends!

I love the book.  It is filled with simple descriptions of various artifacts (mostly arrowheads) and each description includes a hand drawn sketch.  I’ve spent the last month picking it up in my free time and admiring the sketches, reading a bit of the history, and allowing my mind to picture the hands that created them.

You and Me Forever: Marriage in Light of Eternity by Francis Chan and Lisa Chan

My wife picked this one up at our local library book sale.  I don’t read many marriage books but I’m always looking for a good one.  While I appreciate Francis Chan on many levels, this book missed the mark for me.

It lacked focus.  First, Francis and Lisa have different writing styles and points of focus but each writes a section of each chapter.  This does not add to the book but distracts from main points.  Second, and most important, the book spends a lot of time describing how one finds salvation in Jesus Christ.  At times it is less a book on marriage and more a book on salvation and the reality of Heaven.  The book also spends a lot of time railing against the lackadaisical approach to faith found in many churches and Christians.  While I agree wholeheartedly with much of these discussions, they had little to add to the conversation of marriage.  The portions solely focused on the topic of marriage seemed superficial and rushed.  The book is really clear on eternity but lacks depth on marriage.