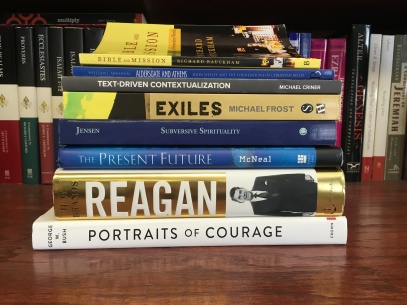 Here’s a rundown of the 8 books I finished in March.  Happy reading!

Bible and Mission: Christian Witness in a Postmodern World by Richard Bauckham

This is the first of three books I read this month for my Doctorate of Ministry studies.  Bauckham is a New Testament scholar and approaches the topic of missions from that perspective.  In light of the globalized and postmodern world, he provides a biblical lens on missions.  The book is less about what the Bible says about missions and more about a way to read the Bible that deeply considers the missionary direction.  To use scholar jargon, the book is a hermeneutical approach to missions.

He provides a great framework of showing the Biblical movement from the particular to the universal. As he describes it, the trajectory of the Biblical narrative moves from Abraham to all the families of the earth in a trajectory of blessing. The trajectory from Israel to all the nations of the world provides God’s revelation of himself to the world. This metanarrative is combated by postmodernism that rejects all metanarratives due to the belief that metanarratives attempt to universalize one’s own values in an expression of authority and oppression. Bauckham argues that the Biblical story does not deserve such resistance since it views history in terms of human freedom to obey or resist God. He believes that Christians must contest the preference for diversity over truth.  The unique element of this book is in that it provides both a hermeneutic for a missional reading of the Bible and provides a brief introduction to postmodern thought.

Subversive Spirituality: Transforming Mission Through the Collapse of Space and Time by L Paul Jensen 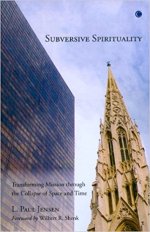 This is the second of three books I read this month for my Doctorate of Ministry studies.  This is definitely an academic work geared to those looking for a technical study of the subject.

Jensen’s argument begins with the notion that since the beginning of the Industrial Revolution our relationship to time end space has acceleration and changed.  What does that mean and where does it lead?  Jensen points out that cramming more tasks requiring greater speed into a given measure of time and packing more into less space eventually leads to a point of collapse.  Thus, he sets out to show a correlation between inward spirituality and outward mission in the historical context of space and time and the current collapse.  His thesis is two fold: 1) that empowered inward spirituality,  expressed in creating time and space for God through solitary and communal spiritual practices, correlates with transforming outward mission, expressed in word and deed; and 2) that because of the cultural collapse of space and time, postmodern mission requires the church to subvert these temporal spatial codes by devoting more plentiful space and time to spiritual practices in her structure of mission, church, and leadership development.

Exiles: Living Missionally in a PostChristian Culture by Michael Frost

This is the third of three books I read this month for my Doctorate of Ministry studies.  This book is built on the framework of the exile metaphor to describe the need for the church to survive in the post-Christian culture. Frost describes how Christianity has become an official part of the established culture of the empire. He argues the Christianity has moved from being a dynamic spiritual movement to being a static religious institution. He further describes how Christendom has been in decline for the last 250 years. Thus, the experience that faced the Jewish exiles of the Old Testament mirrors the church’s experience today.

The book is broken into four parts that provide the church instructions on how to live as exiles: dangerous memories, dangerous promises, dangerous criticism, and dangerous songs.  While highly anecdotal at point, Frost brings a healthy doze of critique and positive steps for moving forward.

Aldersgate and Athens: John Wesley and the Foundations of Christian Belief by William Abraham 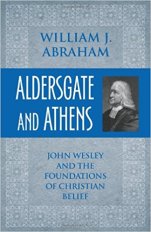 I’m a big fan of John Wesley.  I find his sermons and theology to be incredibly moving and challenging.   I find time reading his thoughts to be edifying and fruitful.  In one of his journal entries Wesley wrote, “I do indeed live by preaching.  My tongue is a devoted thing.”  This deeply resonates with me.

This particular work is a slim treatise (98 pages) on the foundational aspects of Wesley’s theology.  The author treats the work of Wesley both generously and critical.  Abraham is quick to point out brilliance as well as weak arguments.  The book looks a four aspects:  faith and the promise of God, faith and personal experience of God, faith and the power of God, and faith and divine revelation.

The title of the book mentions Aldersgate, a reference an experience in which Wesley had his heart “strangely warmed” on Aldersgate Street in London on May 24, 1738.  This experience propelled Wesley into a lifetime of ministry.  May we all have such a moment.

Text~Driven Contextualization: Biblical Principles for Fulfilling the Great Commission in the 21st Century by Michael Criner 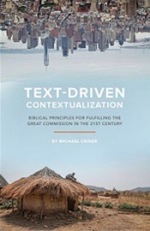 This was a fun one to read.  I’ve known Michael Criner since I was a seminary student.  At the time, he led the college ministry of a church nearby.  He trusted me enough to lead his group in Bible study a couple of times.  I was brand new to ministry … and he probably regretted the decision.  Somehow we stay friends.

Criner is now the past of the First Baptist Church of Bellville, Texas and is doing amazing work.  He recently finished a Doctor of Ministry degree in Christian worldview and cultural engagement.  This book is a byproduct of that effort.  The book focuses on the Great Commission in the 21st century.  How does a follower of Christ go about it?  He examines five sermons in the books of Acts and highlights the insights provided on how to contextualize the gospel in preaching to a diverse world.  It’s heavy on exegesis and filled with plenty of solid principles.  My doctoral studies are in the area of mission and I appreciate Criner’s work as an aggregation of many works on the subject.

The Present Future: Six Tough Questions for the Church by Reggie McNeal 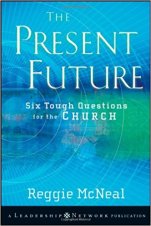 This book was published in 2003 and in some ways it feels dated but in other ways it still seems fresh off the press.  McNeal often sounds like an alarmist.  For example, “The current church culture in North American is on life support.  It is living off the work, money, and energy of previous generations from a previous world order.  The plug will be pulled either when the money runs out or when the remaining three~fourths of a generation who are institutional loyalist die off or both.”  Notice he said the “current church culture” is on life support.  He did not say the “church” is on its deathbed.  While it has an alarmist tone, McNeal’s work provides great insight.

The book asks 6 tough questions to church leaders in response to the collapse of the church culture.  Each chapter focuses new realities through dealing with wrong responses and appropriate responses.  The new realities include: the collapse of church culture, the shift from church growth the kingdom growth, a new reformation of releasing God’s people, the return to spiritual formation, the shift from planning to preparation, and the rise of apostolic leadership.

The book seems dated because much of what McNeal presents in no longer shocking to many of us.  Many of the things he discussed 15 years ago have been made more and more evident.  Yet, it still seems fresh because many of us have not responded appropriately.

Reagan: The Life by HW Brands 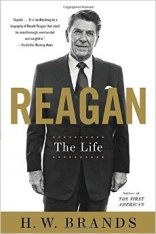 This is my first Reagan biography.  I think I’ve resisted a dive into a Reagan biography up to this point due to the romanticism often espoused by his admirers.  During the lead up to the recent US election it was impossible to hear a Republican candidate give a speech without a Reagan reference or quote.  Along with placing Reagan on a pedestal comes a romanticism with America in the 1980’s.  These previously mentioned Republican candidates often give the impression that during the 8 years of the Reagan administration America was a beacon of light in a world of darkness.  The economy was never better.  American morals were never so pure.  Obviously, a one sided picture.

I finished this work affirming that Reagan’s admirers stand on good ground.  His principled leadership stands out.  From the air traffic controller’s strike to cold war meetings, Reagan accomplished objectives.  Yet, Brands also provides the other side of the picture.  He heavily critiques Reagan’s leadership.  Brands places the scandals and controversies in the Reagan administration (Iran~Contra to the resignation of Secretary of State Alexander Haig) on Reagan’s hands off approach to leading his team.

Brands does a fantastic of telling a fast paced narrative.  Yet, in providing such a brisk walk through Reagan’s life and 8 years in the oval office, he often does so at the expense of exact dating and time frame references.  I often found myself Googling events to find out in what year the event took place.  This is an annoyance when you’re reading an 800 page biography.  That’s a critique but a minor one.

Portraits of Courage: A Commander in Chief’s Tribute to America’s Warriors by George W. Bush 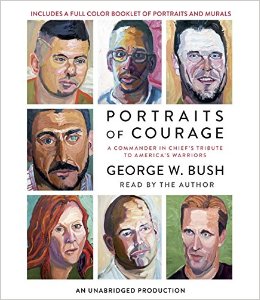 This is a beautiful book.  Extremely high quality layout, binding, and paper.  I’m not an art critic but the paintings are mesmerizing.  I’ve found myself flipping through them a number of times since completing the book.

Post presidency, George W. Bush has taken up the hobby of painting. He began with animals, moved to world leaders, and has now done a masterful job publishing this work depicting wounded soldiers.  The book contains 66 full color portraits and a four panel mural of members of the U.S. military wounded in service to their country.  Each painting is accompanied by a short vignette detailing the veteran’s story and connection to President Bush.

This book fascinates me for a number of reasons: One: living in Crawford, Texas I’m drawn to things pertaining to George W. Bush. Two: I’m intrigued by a former president taking such a risk in picking up a hobby and putting it on display for the world see … and criticize.  Not only are the paintings open to criticism but the paintings are closely connected to the highly controversial military conflicts with which he was so intimately involved.  Third: the stories are inspiring while also heartbreaking.  I admire the loyalty, devotion, and gall to overcome depicted in the lives of these soldiers.  Yet, I’m heartbroken over the footprint of war.  As Jesus said, “Blessed are the peacemakers.”