Here’s a rundown of the 8 books I read in January.  An eclectic collection of volumes.  Plus, one early candidate for book of the year.  Happy reading!

Reversed Thunder: The Revelation of John and the Praying Imagination by Eugene Peterson

Like many pastors, I count Eugene Peterson as a mentor from afar.  We’ve never met but he has taught me countless lessons through the pages of his written work.  Each Peterson work deserves a spot of prominence on your self.  Reversed Thunder is a reflection on the last, but often misread, book of the Bible.  At times I had to force myself to put my pen down because I was tempted to underline almost every line on every page.  This book is now soaked with handwritten stars and scribbled underlines.  I can recommend few books more highly than this one.  This is an early candidate for book of the year.

I read this book in preparation for an upcoming (and coming soon) sermon series covering the letters to the churches in Revelation.  While my sermon series is limited to the first three chapters, this magisterial work covers the entirety of Revelation.  It is filled with poetic language, insightful application, and tremendous commentary.  This book contains as much scholarship as any commentary you can find – yet is superior in spiritual reflection and prose.  Interest in Revelation?  Start here.

The New Faces of Christianity: Believing the Bible in the Global South by Philip Jenkins

This is a book I selected to read for my upcoming Doctorate of Ministry seminar.  While nowhere close to a page turner, the information delivered is insightful and worthy of deep consideration.  The Global South is a reference to Africa, Asia, and Latin America.  Christianity in this  geographic area is booming.  Jenkins has studied Christians of the Global South and found them to be people of Biblical faith – meaning they read the Bible and believe it … literally.

The book details the specific ways in which the Global South understands the Bible.  He looks at their belief in the Old and New Testaments, and who they read the Bible in terms of poor and rich, good and evil, persecution and vindication, women and men.

The book begins with a great story that sets the tone for the book and gives great insight to the material covered.  During a gathering of the worldwide Anglican Communion, two bishops participated in a Bible study, one an African Anglican and the other an American Episcopalian.  Discussion turned into argument.  The African expressed his faith in the Bible and the American stressed the need to interpret the Bible in light of modern scholarship.  Eventually the African blurted, “If you don’t believe the scripture, why did you bring it to us in the first place?”

Fear of the Other by Will Willimon 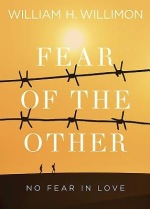 Let’s be honest – this book resembles more of a blog post than a book.  It’s short.  Yet, we all could use more brevity in our lives.  This book is written in typical Willimon Style: 15% keen insight and 85% snark.  If you’re familiar will Willimon you know exactly what I mean.

This book is an unashamed response to recent political discourse and particularly the recent president election process.  In fact, Willimon thanks (now President) Donald Trump, Ben Carson and Ted Cruz for providing the platform for him to write another book.  Willimon states that he is not worried about “opinion polls, or what nine out of ten Americans can swallow without choking.  My peculiar vocation is to help the church think like Christians so that we might be given the grace to act like Jesus.”

The book is full of tweetable lines.  Here are a few:  “Any congregation where this is no growth, no shocking baptisms, no tense meetings full of argument and conflict over what to do about contemporary ‘Gentiles’ is indicative of a church that failing to obey Jesus (pg 70).”  “Christian love is love in action, a move to incorporate, and a strategy that draws somebody into the body in such a way that we know that our church is truly Christ’s church (pg 73).”  “It’s not enough for Christians to prattle sweet sentimentalities that ‘all you need is love.’  There is hard, demanding work to be done against injustice (pg 55).”

Willimon leans hard left but he’s a prophetic voice to the hard right.

I have a fondness for Brueggemann.   I’ve had the pleasure to meet him on a few occasions.  I even asked him a question during a lecture Q&A and he completely dodged it.  I wear that snub like a badge of honor.  I’ve also benefited from a number of his books.  I found Finally Comes a Poet and The Prophetic Imagination to be among a long list of my favorite books.  This current book comes nowhere near that list.  It’s not even in the same hemisphere.  Too harsh?  Of course.  He’s Walter Brueggeman.  He doodles on a scratch piece of paper and an Old Testament Commentary pops out.  What do I know?!

The book makes some serious stretches in my humble opinion.  The main premise of the book is his comparison of 9/11 in the U.S. with the destruction of Jerusalem.  The destruction of the Holy City forced the people of Israel into a period of reality, grief and subsequent hope.  He argues the terrorist attack moved the U.S. from American idealism and exceptionalism into the same process.  Serious stretch.   The book also does some serious Bible quoting. Massive Bible quoting.  Page after page of block quotes.  Quoting the Bible is a good thing.  I’m not criticizing the use of Scripture but I am highlighting that there is not much unique material within the pages.

All that said – the book’s call for a prophetic voice resonates well with me.

Thomas Jefferson: The Art of Power by Jon Meacham

You can’t expect much more from a big, dense presidential biography.  Meacham has proven that he’s up to the task of delivering massive and useful looks into the lives of important figures.

In recent days I’ve read numerous books in which Jefferson plays a key role.  Meacham definitely casts Jefferson in a better light than these volumes.  Yet, I don’t think this makes this work a fluff piece.  Just the opposite.  There is no denying that Jefferson and Alexander Hamilton often disagreed on courses of action.  There is no denying that Jefferson won a fiercely competitive (and ugly) presidential election.  Ultimately, Jefferson prevailed.  He wrote The Declaration of Independence.  He was the third president of the United States.  He deserves a book with the subtitle of the art of power.

This does not mean that Jefferson is always cast in the sunlight.  He gets his moments of shade.   Does this book break new ground?  No.  Would it be the Jefferson volume I’d recommend first?  Yes.

The Republic of Football: Legends of the Texas High School Game by Chad Conine 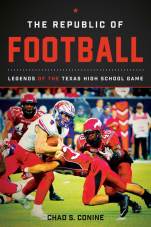 Talk about a fun one.  In a state where football is king, this reads more like Texas history than it does a sports profile.  You’ll find stories of small town teams and legends of football royalty.   And lots of them.

My small town of Crawford, Texas gets a chapter detailing its dramatic state title run in 2004.  The cute part of the story is the team putting President George W. Bush on hold as they celebrated the victory.

You’ll also read crazy stories that demonstrate the importance of Friday Night Lights in towns across the Texas landscape.  You’d think a story of 10 seniors intentionally dropping English class so they could repeat their senior year was make believe – until you read the interviews with the players.  But hey, the did win a state championship.  Clears eyes.  Full hearts.  Can’t lose.

The book has 41 chapters with each chapter (only 7 or 9 pages) detailing the story of one team or perhaps a legendary coach or player.

The framework of the book is comprised of runnings journals as Murakami trained for the New York City Marathon.  Yet, they read as some strange mix of journal entires and published essays.  As Murakami reflects on training he also reflects on life and writing.  The intersection is fascinating but probably only to those interested in running and writing.  A runner probably reads this and gets lots in the rambling thought process.  A writer reads this and probably gets tired of the endless discussions of training regimen.  I happen to be interested in both subjects and finished the book in two sittings.

A Consequential President: The Legacy of Barack Obama by  Michael D’Antonio

Is it too early for this book? No.  It’s far too early.  I read it nonetheless.  Here’s my disclaimer:  People and politics are both nuanced.  While we love to paint people and politics in pictures that are black and white, reality has many shades.  Every leader that ascends to the oval office has incredible strengths and glaring weaknesses.  Every administration has soaring victories and thunderous crash landings.  The Obama presidency is no different.

This book does come across highly partisan.  Yet, D’Antonio make his case.  Obvious from the title, D’Antonio believes that President Obama will carry a legacy of significant accomplishment.  Each significant accomplishment mentioned gets an entire chapter devoted to the ins and outs of the particular situation. Plenty of graphs, charts, and rationale.  All failures mentioned are combined into one chapter.

The significant accomplishments: auto industry rescue, health care reform, energy, environment, foreign policy, education, financial reform, and equality. The failures: race relations, Guantanamo, war in Afghanistan, war in Iraq, war at home, and Wall Street accountability. This list of topics does not give you a sense of the content.  You’ll have to read the book and judge the arguments for yourself.