Here is a rundown of the 8 books I read in August!  Happy Reading! 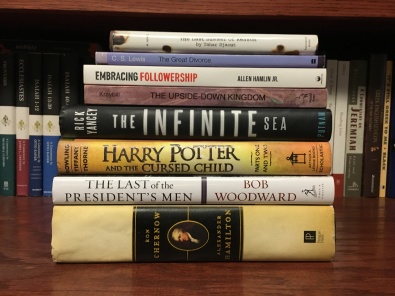 The Upside Down Kingdom by Donald Kraybill 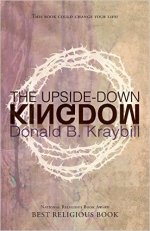 This was my final book for my upcoming Doctor of Ministry seminar.  Glad to have that stack finished.  If I could only say the same for the writing assignments – still plenty of work to get done!

Kraybill is an Anabaptist scholar and professor at Elizabethtown College.  He’s written a great book, Amish Grace, about forgiveness in light of the Amish schoolhouse shooting in Nickel Mines, Pennsylvania.  But back to the task at hand.  The Upside Down Kingdom addresses kingdom theology.  Kraybill uses Jesus’ inaugural sermon in Luke 4 and Jesus’ Sermon on the Mount in Matthew 5-7 to understand the kingdom.  Kraybill is clear – the kingdom is not a place and the kingdom even transcends the church.  For Kraybill the kingdom appears whenever women and men submit their lives to God’s will.  It is a network of persons who have yielded their hearts and relationships to the reign of God.  This must include God’s rule in hearts and social relationships.

Kraybill’s work provides much room for agreement and much room for pushback.  It is a book worth reading for those interested in the subject.

I’m just like my country
I’m young, scrappy, and hungry
And I’m not throwing away my shot

– “My Shot” HAMILTON (the Musical)

I fell in love with HAMILTON (the Musical) in January and it has been a part of every day since.   I listen to it while out for a morning or evening run, while riding in the car, and I quote it any time I can work it into a conversation.  My family can verify the truth of the preceding statements.  They’ve been tired of it for months.  It has yet to loose its appeal for me.

I have owned the Chernow biography (upon which the musical is based) for quite some time.  My love affair with the musical moved the biography from near the bottom of my to-be-read pile to near the top.  I have been slowly reading it for the past two months (maybe three). Some books you enjoy so much that you read them quickly.  Others you enjoy so much that you read slowly and deliberately.  This book was given the latter treatment.  I was sad when I came to the end of the 800 pages.

This is not a work of hagiography.  Chernow shows the many sides of Hamilton.  You see his sinful ambition, pride, and quick temper.  You also dig deep into his achievements, unmatched work ethic, and superior intellect.  The life of Alexander Hamilton  is the story of a founding father  soap opera – filled with villains, untimely deaths via duels, and a political sex scandal.  It would be hard to mess this story up.  Yet, Chernow does more than merely avoiding disaster.  He has written a crisp biography even though the book can substitute for a boat anchor.  It approaches the realm of the “all-time favorites” list.  Let me stew on that a bit.

This is a great read for biography lovers, history buffs, presidential enthusiasts ( you get tons of info on Washington, Jefferson, and Adams), or anyone who loves a great story.

The Last of the President’s Men by Bob Woodward

Back in March I read Woodward’ blockbuster book, All the President’s Men, written in the wake of the Watergate Scandal.  The book details Woodward and Carl Bernstein’s reporting for the Washington Post on the full scope of the crimes committed and introduced readers to the source of insider information known as “Deep Throat.”  It was, and still holds up 40 years later, as a important glimpse to the resignation of President Nixon.

I have less flattering things to say about Woodward’s recent effort.  The Last of the President’s Men is a recent release in which Woodward tells the story of Alexander Butterfield, the Nixon aide who actually revealed the fact that President Nixon had a tapping system installed in the Whitehouse.  The book is written from interviews with Butterfield, an unpublished memoir written by Butterfield, and boxes of documents that Butterfield removed from his office after he left the Whitehouse.  While the book is a fun and quick read, it provides no new meaningful information.  It seems more like a further character assault on Nixon than it does hard-hitting journalism.

The highlight of the book is the appendix that provides copies of the Whitehouse letters and memos sent back and froth from staff and the president.  The paper trail is fascinating and the handwritten margin notes are simply great material of presidential nerds (I’m only pointing the finger at me).

Embracing Followership: How To Thrive in a leader-Centric Culture by Allen Hamlin

This was a random pick up and it did not disappoint.  As a frequent book buyer and as a pastor, I get sent magazines from publishing houses.  I usually give them a quick scan before depositing them in the trash can.  This book caught my eyes and I quickly ordered it.   Hamlin looks at our society, fascinated by leadership, and asks the question, “Have we devalued the significance of followership?”  This is a pointed question.  I think it has even greater implications for those who claim to follow Christ.

As a pastor, I lead a number of services and activities each week, countless community events, camps, outreach programs – all driven by volunteers.  In fact, these things could not be done without the time and effort of volunteers.  Hamlin provides a primer on excellent followership, which he defines as the valuable contribution to a collective effort made by team members.  This is a much needed word in a world of me, myself, and I.  Much of the book is filled with breaking down misconceptions of leadership and followership while building up a healthier option.

The writing is concise and clear while remaining filled with helpful information.  Hamlin could give other authors a lesson on the ability to say enough without saying too much.

The Last Summer of Reason by Tahar Djaout

This is a fascinating book, along the lines of Fahrenheit 451, with a back story to the author that gives it significance beyond measure.  On May 26, 1993 Djaout was shot in the head three times outside of his apartment.  He died a week later, the first of 57 Algerian intellectuals killed in a wave of terror. He was an important symbolic target. A New York Times article states, “More than anyone, he embodied the tolerant, cosmopolitan outlook of Algeria’s French-speaking intelligentsia, whom fundamentalists vilify as latter-day colonialists, obstacles to the dream of an Islamic state.”  (See ‘The Last Summer of Reason’: A Despairing Parable About Fanaticism)

Upon Djout’s death, an unpublished short novel about a country ravaged by Islamic fanaticism was found and published as The Last Summer of Reason.  The work is more than a bit prophetic.  In the short essay-like novel, a bookstore owner is harassed and assaulted for his promotion of ideas (book selling).  Art and literature are no longer acceptable in the new world ruled by fundamentalist terrorists seeking to control every element of life and forcing people into submission.  It does not read like an unpublished  work.  The prose is beautiful and the meaning is powerful.  The author’s life proved the message before it was read by the very first set of eyes.

Harry Potter and the Cursed Child (Parts One and Two) by JK Rowling, John Tiffany, and Jack Thorne

The world of Potter fandom is up in arms about this   errr screenplay.  Some are screaming “JK did not even write this!” others are pouting “This is fan fiction!” or “Harry would never act that way!” or “Plot holes!”  Well … get over it.

The Harry Potter series has been written for young readers from the very beginning – plot holes have existed in every other book.  JK gets to decide how Harry acts – not you.  And personally, I think Rowling deserves a pat on the back, instead of criticism, for giving credit to other writers.  It would have been easy to plaster her name and her name alone on everything.  If she had taken sole credit … I bet the same screenplay would have been received with great joy from most of the haters.

The Infinite Sea by Rick Yancey

This is the second book in a young adult sci-fi trilogy.  I read the first book, The 5th Wave, in June and quickly followed up with the sequel.  I found the first installment to be incredibly creative and engaging.  It uses point of view changes to place the reader in the mind of different characters.  The follow up does the same to a lesser degree of success.  Comparatively speaking, the second book has half of the action and plot advancement of the first book.   The slight plot twist at the end of this one left me more confused than surprised.

The Infinite Sea takes you away from the main character in the first book and develops some plot lines introduced in the first book. How’s that for no spoilers?!  While I appreciate the development of another character, there was a bit of frustration with wanting more of the character that made the first book so enjoyable.

While I’m not overly enthused to read the third installment, I picked up the series of a $2 per book at a library book sale.  I can’t let my $6 go to waste.  You’ll see the third book soon.

The Great Divorce by CS Lewis

I desperately want to be a fan of CS Lewis … but I find that to be a difficult endeavor.  I love The Screwtape Letters.  I love Narnia.  Everything else – eh.  I realize his literary significance.  I understand his theological impact.  Yet, I struggle to work through his books.  The Great Divorce is no exception.

The book watches a character participate in a  bus trip through Hell and Heaven.  With that said, The Great Divorce is a book that often makes you put it down and say, “Let me think about that for a minute.”   Here’s one describing the people in Hell:

“There are only two kinds of people in the end: those who say to God, ‘Thy will be done’ and those to whom God says, in the end, ‘THY will be done.’ All that are in Hell choose it. Without that self-choice, there could be no Hell. No soul that seriously and constantly desires joy will ever miss it. Those who seek, find. To those who knock, it is opened.”  (page 90)

Or how about this …

The choice of every lost soul can be expressed in the words, “better to reign in Hell than serve in Heaven.” (page  86)

Heaven is the “land not of questions but of answers, and you shall see the face of God.” (page 52)

Some of the theology found in this allegory is thought provoking and some is muddied.  Read it and find out which passages fall into which categories.  My most frequent comment while reading, “Huh.  Show me that in the Bible!”  I hope that’s my response to every piece of theology that I encounter.