“The Word became flesh and blood, and moved into the neighborhood.” – John 1:14 (The Message)

This is not a rant about a “war on Christmas.”  You will not hear a thing about an elf on a shelf, consumerism, or the recent appearance of Hollywood movies on Biblical topics.

I want to talk about Jesus … 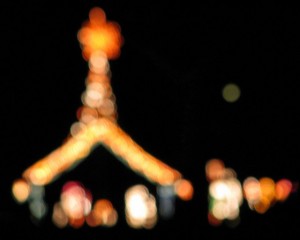 Ever seen the TV series Undercover Boss? The show details a CEO or high level executive walking out of the board room and into the front lines. They take off the tie and put on a uniform. The executive will go undercover within his or her own company and get dirty working the menial, everyday jobs.  One of my favorite episodes involved one of the owners of the Chicago Cubs baseball team. This executive left his catered food in the luxury suite in order to sell hotdogs and clean bathrooms in the ballpark facilities.

It’s a great concept. Yet, at the end of the day it still feels like a photo op. It’s a manipulated scenario. The executive is not in the trenches for very long.  Yet, it does provide a starting point to discussing the incarnation.  Jesus took on flesh and moved into the neighborhood.  It was far more than a photo op.

He was born to a virgin, a girl from the small town of Nazareth, named Mary. She was pledged to be married to Joseph, a carpenter. This is a far cry from the depiction we get of Heaven. There are no streets of gold and pearly gates. But God took on flesh anyway.

There is no room for Joseph and Mary, and  the baby Jesus is put in a manger.  Manger – let’s be more clear – a feeding trough. No one sings “Away in a Feeding Trough.” Perhaps we should. The Savior of the World who will die on a shameful cross is born in a shameful excuse for a crib. This is a far cry from the depiction we get of Heaven. There are no streets of gold or pearly gates. But God took on flesh anyway.

Why does this matter?

It matters, it’s a big deal because it gives us a front row seat to the character of God. You might ask, “Will God show up here? In my life? In this mess?”

Will God show up in my marriage?

Will God show up in my workplace?

Will God show up in my depression?

Will God show up in my addiction?

Will God show up in my frustration?

Will God show up in my failure?

Will God show up in my struggle?

Will God show up in my ordinary day?

Will God show up in my ordinary life?

How do I know? He has done it before and he will do it again.