This is late.  But you don’t need my excuses.

Here’s a rundown of the 5 books I read in March.  The book total is down due to the size of one of the books in the stack.  Enough with the excuses already. Happy reading! 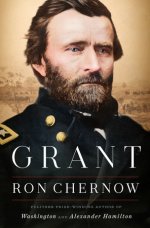 Chernow is the author of a previous year’s top spot on my favorite book of the year list.  His biography of Alexander Hamilton is a topnotch piece of writing and history … and it sparked a hit broadway play.  His Grant biography is no less of a masterpiece but much harder to read.  It is 959 pages of actual text.  A large portion of those pages cover battles in the Civil War.  This book began as a doorstop and became a bit of a ball and chain through the discussion of troop deployments and maneuvers.   It turned back into a mere doorstop when Grant became president.

The top biography of my favorite books of the year list for 2017 was Ronald White’s American Ulysses.  Despite my comments above, I think I prefer Chernow’s depiction. Chernow provides a much fuller picture of Grant’s relationships, in particular with the likes of his own father in law and General Rawlins (who helped keep Grant sober).  Chernow also gives a fuller picture of Grant’s failure to rid his presidency of scandal.  I guess you can do a lot with an additional 300 pages!

Unlimited Grace: The Heart Chemistry That Frees From Sin and Fuels the Christian Life by Bryan Chapell

In February I had the pleasure to have a number of conversations with Chapell as he led a preaching convocation at Baylor’s Truett Seminary.  I don’t want to be accused of sensationalism or peddling cliches but … it was a lightbulb moment for me.  Chapell’s discussion on grace left me digging through and praying over Scripture for a number weeks.  The end result was a handout I have taught from three times in the last month.  I’m slowly refining the handout and clarifying my line of thought.  All that to say, I owe a debt of gratitude to Chapell.

As for the specifics of the book, tremendous content … but not a great read.  The book has moments of preaching and pastoral gold.  The chapter “Bread, Not Bribes” discusses doing things to feed the soul rather than in hopeless attempts to earn God’s favor.  It is worth the cover price by itself.  Overall, the book chapters are a bit too short, discontected, and filled with section headings.

The Holy Spirit in Today’s World by WA Criswell 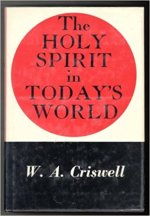 Sometimes books just fall into your hands at the right time.  Just as I was having many conversations about the Holy Spirit and attempting to clear up a few aspects of my own thinking, I made a quick trip into a used bookstore and found this gem for the price of a few peanuts.  I exclaimed “Take my money now” as I picked it up.

Criswell is a Baptist preaching legend known for his Biblical exegesis, showmanship, and fiery oratory.  On top of that, he was quite the character.  He followed another legend, George W. Truett, as pastor of First Baptist Dallas.  Both giants pastored that church for over 40 years.

This volume on the Holy Spirit does not give you a glimpse of Criswell’s greatness.  It reads less as a theology of the Holy Spirit and more as a criticism of many abuses done in the name of the Holy Spirit.  Arguments are thin and often seem to be based on a defense of well-established positions rather than Biblical exegesis.

Another book that fell into my hands at the right time.  Due to preaching a six-week sermon series on Acts 13, I was standing before my congregation and reading a passage that made a reference to prophets in the church.  It created many, many conversations via email and across my office table.

The appendices on the canon of Scripture and the sufficiency of Scripture are superb.  Yet, at points they seem to undercut his own position of prophecy.

Bush at War by Bob Woodward 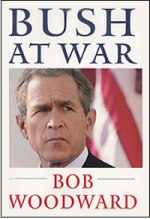 This is the first book in a trilogy that covers George W. Bush’s presidency during the wars in Afghanistan and Iraq.   They’ve been sitting in my office for over two years.  I decided to finally get around to them after completing the Jean Edward Smith’s biography on Bush last month.  This first volume covers how Bush and his team led the country into Afghanistan after the shock of the September 11 attacks.

The book is a delight to read.  Woodward, no rookie at this type of thing, takes you into the rooms where it all happened.  The book is a narrative built by notes taken during more than 50 National Security Council  and other meetings.  These meeting notes, along with personal notes, memos, calendars, transcripts, and other documents produce direct quotes from the president and other decision makers.  Woodward also interviewed 100 people involved in the decision making including President Bush,  key war cabinets members, White House staff, and officials in Defense and State departments, and the CIA.

It provides great fodder for a discussion on leadership.  All leaders make decision.  Yet, decisions made in the aftermath of terrorism are in a league of their own.  The book provides a case study in crisis management and managing personalities.