Here’s a rundown of the 8 books I read in August.  I apologize for it’s late arrival.  The last few weeks have been crazy busy.  It is a varied list: two books on preaching, one book of theology, one commentary, one work of fiction, one political biography, one pastoral memoir, and one mission memoir. Happy reading!

I love commentaries.  I’ve amassed a large collection by digging through used bookstores all across the great state of Texas.  Yet, rarely do I read a commentary from front cover to back cover.  Commentaries are works of reference and I treat them as such.  I pick them up to study a particular passage and then return them to the self.  Yet, this was not the case with this volume.

In my personal Bible study I read through Judges and Ruth in August.  As part of my morning routine, after reading a chapter or two from the Biblical text, I picked up Way’s commentary.  It was a big blessing to me.  I love the Teach the Text Commentary Series.  It’s format is great for personnel study and for quick references when looking to teach a book of the Bible.  I’ve been a part of a subscription service through Baker Publishing for a number of years that sends me a volume from this series every 60 days at a discounted price.  Unfortunately, the series has been discontinued.  There are a few more volumes to be published but the entire series will not be completed.  I’m bummed.

Back to the topic at hand.  Volumes in commentary series are not made a equal.  Even in a tremendous serious some volumes fall flat and others rise to the top.  This volume is a brilliant piece of scholarship while holding tight to pastoral sensitivity and practical insight.

Heralds of God by James Stewart

Stewart’s main argument is for preachers to provide congregations with sermons that are direct, simple, and forceful.  Or you could summarize and shorten the book to say: Don’t be boring.  That’s solid advice.

The Practice of Prophetic Imagination: Preaching an Emancipating Word by Walter Brueggemann

I have great respect from Brueggemann.  His books Prophetic Imagination and Finally Comes the Poet had a tremendous impact on me as a young seminarian.  I count them as favorites to this day.  Yet, this current volume left a bit to be desired.

The book is slim, a mere 149 pages of actual text.  Within those 149 pages, the majority of the text is filled with large Scripture quotations and bulleted lists and abbreviated points.  All of that to say ~ the books seems more like an expanded blog post and less like a fully developed treatise on the subject at hand.    To take it a bit further, as a fan of Brueggemann, this book does not seem to stand upon new ground.  It is familiar material.

The book is built around the premise that “Prophetic proclamation is an attempt to imagine the world as though YHWH ~ the creator of the world, the deliverer of Israel, the Father of our Lord Jesus Christ whole we Christians come to name as Father, Son, and Spirit ~ were a real character and en effective agent in the world.”  The book provides illustrations of how do this as did the prophets and provides plenty of pitfalls and temptations to avoid.

If this is your first exposure to Brueggemann I’m sure this will be of great help to you.  This book was given to me as a gift by my good friends at Buckner International who do great work in Jesus’ name along the Texas/Mexico border.

Benefit of the Doubt: Breaking the Idol of Certainty by Greg Boyd 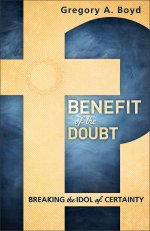 This is the third month in a row in which a Greg Boyd book appears on my reading log.  I’m attempting to tackle all the books on my TBR (to be read) shelf and Boyd happens to appear a number of times.  Just one more to go!  As I’ve said before, I agree and disagree with Greg Boyd on many points of theology.  Thus, I love to read his books.  He stretches me to think deep about theology and forces me to return to the Bible time and time again while reading his work.  You can’t ask for more from a book.

In this volume, Boyd argues for his understanding of biblical faith.  He says that biblical faith is not void of struggle and ambiguity.  Many people claim that a person’s faith is as strong as that person is certain.  Thus, doubt is commonly viewed as the enemy of faith.  Boyd makes the case that faith is grounded in authenticity and is “unwilling to sweep questions, doubts, and complaints under a pious rug to avoid the pan of a cognitive dissonance.”  He makes his point with tons of Scripture and tons of his personal story.  A really theologically rich book that is made enjoyable through personal connections.

Flowers and Fruits in the Wilderness by ZN Morell

In 1835 ZN Morrell left Tennessee to preach the gospel in primitive Texas.  How primitive?  At one point Morrell describes Houston as a place with few tents.  The book is essentially Morrell’s journey as he travelled across Texas preaching the gospel, planting churches, and forming Baptist associations.  Along the way he ran into trouble ~ to include fights to the death with Native Americans.  In many ways the book is an inspiration tale of missionary zeal.  In many other ways, it is a sad story of contradictions.

In Pursuit of His Glory: My 25 Years At Westminster Chapel by RT Kendall

I picked this book up for $2 at an antique store in McGregor, Texas.  Let that be a lesson that good books can be found anywhere.  Always take the time to look.  If you see a stack of books ~ dig through them.

I heard RT Kendall preach at Truett Seminary during one of my Doctor of Ministry seminars.  The sermon was different from those often preached in the Paul Powell chapel.  It had less of the tone of an academic treatise and more of the tone of a charismatic evangelist.  It stayed with me for some time.

Kendall was the pastor at Westminster Chapel for 25 years following immediately in the footsteps of the legendary Martyn Lloyd~Jones who followed in the footsteps of legends G. Campbell Morgan and John Henry Jowett.  The book is a great pastoral memoir but also in part a textbook on how to pastor in the giant shadows of those who faithfully filled the pulpit before you.

I loved this book while scratching my head all the way through it.  Kendall is impossible to describe and impossible to put in anything that resembles a box.  He preached at legendary Westminster Chapel as a Calvinist but also as a charismatic.  He was mentored by the Lloyd~Jones but associated his ministry with Arthur Blessitt and Paul Cain.  Those things just don’t make sense!

Once a Runner: A Novel by John Parker  Jr. 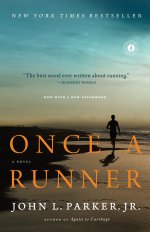 It’s a typical sports story about a quest to become a champion despite obstacles and setbacks.  I enjoyed the story but wished the ending wasn’t so “out there.”  It gets a bit cheesy at points but is a great insight into the world of running.  The stories of training routines and discipline might read as unbelievable to those unfamiliar with the sport.  Yet, others with find them true to life.

A Charge to Keep by George W. Bush

I found this for $1 at my local used bookstore.  As one who loves presidential biographies and lives in Crawford, Texas ~ I would have easily paid double the price.  This is Bush’s autobiography released as he was running for president in 1999.  The book is not a sweeping biography in the true sense of the genre.  Rather, it is loosely connected stories that cover his time during childhood, Yale and Harvard, the oil business, and the Texas governor’s mansion.  In reality, it was a PR piece on the presidential campaign trail.

You can’t really criticize a book like this one.  It’s a PR piece and everybody knows it.  It’s merely an attempt to display the personality of the candidate while also stressing values and accomplishments.  What make this PR piece unique is the story of faith that Bush weaves throughout the narrative.  He is very open about his problems with alcohol and decision to quit drinking.  He is also very open about his faith.  This is what opens the book up for some interesting criticism in my opinion.

After a chapter that discuss his faith, conversion, and the impact of Billy Graham on his life, Bush devotes an entire chapter to discuss Karla Faye Tucker and Henry Lee Lucas.  As the governor of a state with the death penalty, Bush was left with the responsibility of deciding life or death for these two death row inmates.  He commuted Lucas’ sentence to life in prison and spared his life.  He did not due the same for Karla Faye Tucker.  Bush writes this chapter with incredible sensitivity and openness.  It makes for a gripping read.  Yet, following a chapter that discusses his faith in Jesus Christ in great detail, I was shocked by the lack of serious discussion of faith in his decisions literal issues of life and death.