Here’s a rundown of the 6 books I read in June.  I made it through a few big books but it was hit or miss in terms of enjoyment level.  Nonetheless, I’m glad I read each one of them.  Happy reading! 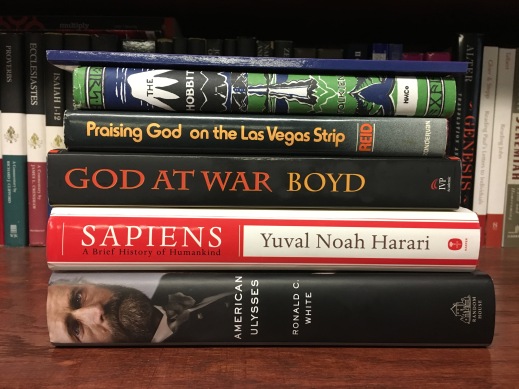 The Hobbit by JRR Tolkien 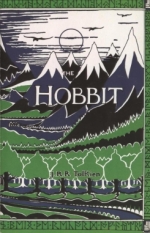 I need to make a confession.  And I pray that the website that bears my name is a safe place.  Here goes nothing.  I really want to be a fan of Tolkien … but I just struggle to finish his books.  In fact, I struggle to enjoy them.  Period.  There I said it.

With that confession, I’m still able to see his literary genius.  I fully understand why he has such a devoted following and continues to sell books by the boatload.  Its just not my thing.  Reading Tolkien is much like watching golf for me.  I can appreciate watching golf on Sundays.  I admire and recognize skill … I just don’t enjoy watching the sport.

I’ve previously read Fellowship of the Ring and struggled to make it to the end.  In an effort to really dig in to Tolkien, I decided to start at the very beginning.  I was enthralled with The Hobbit up to the point that Mr. Baggins found the ring (that should not be a spoiler for anyone at this point!).  But then the story continued and continued and continued.  Now that the The Hobbit is back on the shelf, I don’t now if I can handle reading Fellowship a second time.

Praising God on the Las Vegas Strip by Jim Reid

I picked this one up at a book giveaway.  Yes ~ a giveaway.  Who could resist a book with such a title and cover? Not me.

This is the fascinating story of Jim Reid’s burden to minister to the people working on the Vegas strip.  This burden led him to resign as pastor of a traditional church and take on the role of chaplain to the strip despite very little support and numerous barricades.  Through it all, Reid was able to reach performers, bellhops, stagehands, and waitresses with the message of Jesus Christ.

The book is a dramatic testimony of God’s call and what God can do with people who are faithful.  I would have gladly paid double the money I spent on it.  Wink.  Wink.  Despite the amazing content, the books style does make it a chore to read. Much of the book reads like “Let me tell you this story … Now this story! … Now this story!”

Published in 1975, I began to ask the question: “What’s happened in the last 42 years?”  After a rabbit hole of Google searches, it appears Jim Reid is no longer in ministry but works as a “healer” using a method he developed titled “advanced meridian tapping.” Strange.  He’s also written a book providing  a Christian view of reincarnation.  Even more strange.  Yet, the power of this story still stands.

God at War: The Bible and Spiritual Conflict by Greg Boyd

I really appreciate Greg Boyd.  I often listen to his sermons and devour his books.  He preaches and writes with incredible levels of sincerity and passion.  He challenges me to study Scripture and forces me to think about things with a heart that follows Jesus and with the eye of a scholar.  With that said, I don’t always agree with him.  In fact, that’s one of the reasons I enjoy his work so much.  I think there’s great value in reading outside of your comfort zone.

God at War is a work of scholarship.  Boyd writes book on the popular level but he also writes academic tomes.  This falls in the latter category.  It is his defense of what he calls the warfare worldview.  This is a perspective on reality which centers on the conviction that the good and evil aspects of life are to be interpreted largely as the result of good and evil, friendly and hostile, spirits warring against each other and against us.  Yes.  You read that correctly.  He argues that the warfare worldview is the view held by the biblical authors who demonstrate a passionate concern for confronting evil in all the individual and societal forms it takes.  The book provides tons, and I mean tons, of argumentation and biblical support.

This book was helpful to me in many ways.  My understanding of spiritual conflict is underdeveloped.  And that’s a tremendous understatement.  This book helped me solidify more than one thought.  Some thoughts line up with Boyd.  Others did not.

Sapiens: A Brief History of Humankind by Yuval Noah Harari

This book came on my radar via Bill Gates.  You might not know it but Bill Gates is a fellow book nerd and keeps you updated on his reading through his website.  He will often review books and come up with recommend reading lists.  This title was featured on one of his favorites lists.  When I found the book at my local library book sale I snatched it up without thinking twice.

Yet, Sapiens almost drove me crazy.  For a book so well received by very smart people, I was shocked at the lack of footnotes, citations, quotations, or even argumentation.  The book reads more like a blogpost than it does a work of scholarship.  The author makes wide, sweeping statements and expects the reader to agree with him.  The books is also openly hostile to religion.

You might get tired of me raving about a thick, dense presidential biography … but here I go again.  I loved this one.  I loved it in part because of how much I learned about this bearded wonder.  Prior to this book my knowledge of Grant was extremely superficial.  I knew the basics: He was a successful Civil War general.  He was president.  He was known for hitting the bottle hard.  White provides a much fuller picture and details a man that really gripped me.

White deconstructs popular caricatures of Grant.  Rather than painting Grant as a drunkard who lacked intellectual ability and curiosity, White shows Grant’s love of reading, deep faith, military and leadership genius, love of family and downplays drunkard myths.  White also gives great detail of Grant’s war efforts at Fort Donelson, Shiloh, and Vicksburg among others.  Yet, it never approaches overload for those not interested in military minutiae.

I will now turn to read Grant’s personal memoirs, widely known as a work of literary genius.  Published by Mark Twain, these memoirs were sold around the country by individual agents who offered various prices according to the selected binding.  Hundreds of thousands of copies were sold shortly after Grant’s death.

US Constitution and Declaration of Independence

I devoted about 30 minutes to a slow read of the US Constitution and Declaration of Independence.  I put them down and picked them up again a few weeks later for another read.  It is amazing that such a short work can cause unity and division.  It’s language is beautiful prose.  Yet, as we’ve found over the course of the last 200 plus years, its prose can be precise and can be vague enough to cause conflict.  Prior to your next political discussion, do yourself a favor and read through these documents. I fear that far too many people have escaped the education system without reading them and far more simply have no desire to read them.

The particular copy I purchased was a 2013 edition published by Skytower Press (Amazon Link Here).  It is a nicely printed paperback with fairly large print.  Yet, it is riddled with typos and spacing issues.  But for $4.95 I’m not raising a fuss.